Back in May, I wrote a blog post about having another go at a capsule wardrobe that detailed my plans for summer sewing. I was rearing to go and had already cut out my first garment, a Nina Lee Kew Dress. Then, I blinked and all of a sudden it was August! I actually completed the Kew Dress several months back, but it’s taken me this long to put a blog post together, partly because I wanted to put thought into how I was going to write it and mostly because I’m a massive procrastinator. I’ll definitely admit now that the chances of getting my capsule wardrobe completed before the end of summer is slim, however I’m determined to complete them eventually and with that, here is my review of the Kew Dress.

I think I would happily say to anyone who would listen that you would have to pry the Kew Dress out of my cold, dead hands. There are no two ways about it; Nina Lee is a genius and this dress makes me feel like I’m a princess at a tea party. I love the vintage inspired style, but I also love that I can wear it without feeling like I’m wearing something “vintage”. The style is so versatile that I would be happy to wear it almost anywhere and I’m looking forward to experimenting with the pattern a bit more to see what I can create using different fibres and maybe a few hacks too!

So far, I’ve made three of these dresses, the latest being the one for my capsule wardrobe and I have been very pleased with the result each time. The pattern goes together beautifully and the instructions are clear and easy to follow with helpful diagrams. The fit is also fantastic; I made the size 10 and didn’t need to adjust it all, which I was very pleased with as I often make things only to find out they are too big in the waist or over the hips. I’ve also now made both versions of this pattern, so I’ll show you each one below:

I made my first Kew Dress last summer and instantly fell in love. I used one of our Dashwood rayons and made version 2 which has straps and cold-shoulder sleeves. Making this dress at first was definitely an experiment for me. It is what I suppose you would call midi-length, finishing around mid-calf which compared to the rest of my wardrobe seemed the equivalent of trailing on the floor. I was not convinced that I would like it, but I felt really inspired by the bodice and told myself that I could always chop the length to above the knee if I thought it looked frumpy when finished. I was very pleased with the result! Even with the extra length, the dress felt light and floaty and I also used some rhinestone flower buttons from the store which added a really nice touch. I’ve worn it a few times, including to go out with my friends and it was very comfortable and felt super classy.

Then, in April this year I finally got around to making another. This time I chose a cotton, using our Myriel print, and I tried out version 1. Previously, I had been even more nervous of this version than the other one. I love vintage-inspired style, but I’m always a little worried that I’ll look like I’m dressed in a costume. However, I think the contemporary twist to the Kew Dress lets you have your cake and eat it too! And, having tried both styles of dress, I think that the sleeved version is actually my favourite. I really love the little puff sleeve and using a stiffer fabric like cotton really accentuates this feature. I also added a little contrast using the off-white Atelier Brunette buttons to finish it off.

That brings us to the final version, the one that I made recently for my capsule wardrobe collection. I made this one in our Rebekah Linen using the periwinkle colourway and I think this is definitely the best of both worlds, softer than the cotton but offering much more structure than a rayon or viscose. I’m a recent convert to linen. I used to absolutely despise it and my catchphrase in the office was always “surely we don’t need more linen!”, but I have to say – and this is something most kids would rarely admit – my mother was absolutely right. We do need more linen. Since making this dress, I can’t get enough of linen and most of my sewing plans centre around it. It’s such a wonderful versatile fabric and I’m looking forward to expanding our colour ranges next year!

I’m not sure I could say which of the three is my favourite, but I would probably say one of the Version 1s. However, my final words would definitely be to recommend this pattern entirely! Nina Lee is one of the best independent pattern companies I have come across and I’m never disappointed with the quality or style of her patterns. I’m looking forward to seeing what she produces in the future and I’m hoping to make a pair of Piccadilly Pyjamas soon!

As for my next sewing project, I’ve already started a pair of Burnside bibs (which was the second thing on my capsule collection plan), but I have to admit that I’ve also got very distracted over the past couple of month so I’ve also got a host of other half-started projects on the go! I’ve told myself that I’m not starting anything new until I’ve finished what I’ve started, but we all know that’s a lie! But, I’ll be back on the blog soon to update you on my sewing adventures!

View all posts by luloudesigns 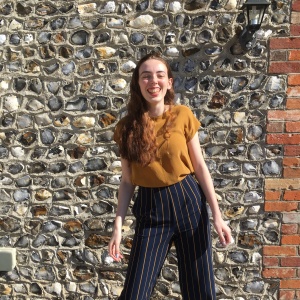 Hi, I’m Lucy: one half of the mother-daughter team at Lulou Designs and a dressmaker in the making. Follow me in my sewing adventures as I try to perfect my own unique style!

Another little green number we’ve made recently!
Our new season prints are starting to arrive! We’ve handpicked the latest selection with colour analysis in mind, to help you select prints you love which will suit your complexion so you’ll look stunning.
We’ve been sewing behind the scenes when we can but we’re not very good at making time to share our makes.
We are quite partial to a spot or print here, like this lovely cotton sateen in purple and white. There are lots of new ones in the shop if you fancy a look !
There’s only a few hours of the sale left! Don’t forget to drop by the website for 20% off all fabrics and up to 40% of roll ends! 💜
Our sale ends Sunday! Don’t forget to stop by our website for 20% off all fabrics, including this gorgeous new viscose.
Autumn/Winter Capsule 2019 Dressmaking Kits Lulou Makes Spring/Summer Capsule 2020 Uncategorized
Loading Comments...
Comment
×
%d bloggers like this: